Which power tool brand would you say is better – Festool or DeWalt? Most people often battle this question when choosing power tools for their arsenal.

Both Festool and DeWalt power tools are popular, recognizable, and reliable. DIYers, hobbyists, and professionals highly recommend these products.

But which brand is better?

The answer lies in consumer’s preferences and the work at hand. This is because both companies produce innovative and durable tools.

Take a look at the comparative details between Festool and DeWalt:

Having looked at the comparative details, let’s take a history lesson on how these two popular brands came to be. I will also take you through some of their reputable power tools to make a comparison.

The German company – then known as ‘Fezer & Stoll’ – was started in 1925 by company partners Albert Fezer and Gottlieb Stoll. Initially, it was all about repairing wood-processing machines and modifying them.

But as time went on, they started making inventions. In 1927, the world received its first portable chainsaw from Fezer & Stoll.

Since then, the company has made numerous productions to date. These include portable saws, orbital sanders, portable circular saws, plunge saws, and more.

Then in 2000, the power tool division spun off to become an independent company, known as ‘Festool.’

The company has made remarkable developments since 2000. As of late October 2017, Festool has subsidiaries in the United States, United Kingdom, Canada, France, Asia, Russia, the Netherlands, and 20 more countries.

Festool has produced high-quality products during the 90+ years they have been operational.

Here are some of their power tools: 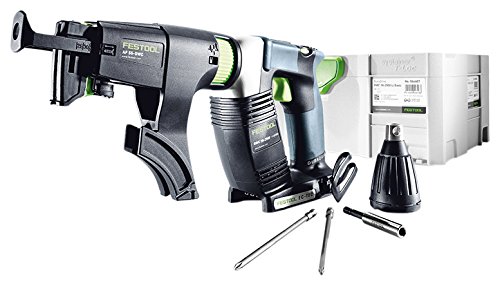 Festool has a variety of drill screwdrivers, but I believe the Festool 201675 stands out. The gun has fast speeds of 4500 RPM that makes it effective. It also features impulse drive functionality that promotes battery life.

This model has an electronic and mechanical depth control. These controls have an automatic cut-off that prevents over-driven fasteners, thereby saving time and material.

Festool 201675 is quiet during operations and gives minimal fatigue to the user. It is durable, too, as it uses an EC TEC brushless motor, a serviceable magazine, and strong internal parts. 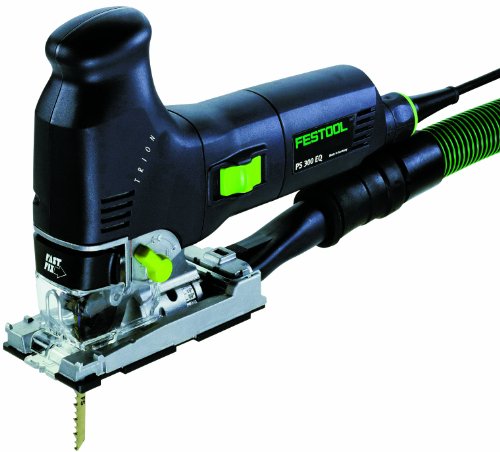 Festool jigsaws are lightweight, versatile, and have superior motor technology. Take the Festool 561443, for example.

The jigsaw has a 6-amp motor that delivers consistent, splinter-free cuts through soft and hard materials. The saw has an adjustable carbide-tipped jaw that prevents the blade from deflecting when cutting through curves and hard materials.

In addition, the Festool 561443 is productive since it saves time. For starters, it is lightweight, thus easily portable. The system also has ample space to store tools, which saves time and increases productivity.

The model has two lasers for precise and accurate cuts. It also features a large bevel scale and micro-adjustable bevel angle.

With a 1600 W power consumption, the Kapex KS 120 can cut all types of materials and create numerous angles. The saw is more durable than DeWalt since it has a rugged design and a durable motor. 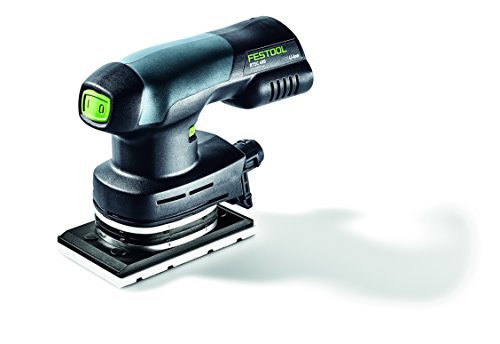 The sander includes Jetstream dust collection technology that extracts dust from the work surface. This not only brings about better sanding results but extends the abrasive’s life.

Why You Should Buy Festool Power Tools

If you are on the fence about buying a Festool tool, here are reasons why you should buy them:

All Festool tools are fast. Whether it’s a dust extractor, circular saw, router, or sander, all machines are designed to deliver outstanding results in the shortest time possible.

They have powerful motors, variable speeds, and other innovative features to provide fast, consistent results.

Festool tools are easy to handle and control.

They have an outstanding balance, minimal noise, and vibration to reduce user fatigue. Some have dust extraction mechanisms that collect debris for easier clean-up.

Others are lightweight for easy transportation.

DeWalt, an American Company, started in 1924. The man behind this company was Raymond E. DeWalt, who also invented the radial saw arm.

The company had its first plant and offices in Leola, Pennsylvania, where they manufactured ‘Wonder-Worker,’ a machine with nine different configurations.

DeWalt company grew over the years as it kept up with government orders and demands for wartime machinery and defense tools.

In the early ’90s, Black & Decker started to rebrand their high-quality tools to DeWalt, and by 1994, the company had taken over ELU, a German wood-working tool company. DeWalt used ELU’s technology to increase its product line, and by 2001, the company had over 200 electric hand tools and more than 800 accessories.

Since 2005, DeWalt has introduced remarkable innovations like the Active vibration control that reduces up to 50% vibration; diamond-edged blades that are more durable; and 20V Max lithium-ion tools for more productivity.

It has also featured Tool-Connect that allows users to track and manage their machines, and FlexVolt, which increases power and runtime.

Currently, DeWalt has its headquarters in Baltimore, Maryland. In addition, there are seven manufacturing facilities in the US.

DeWalt has a large number of power tools in its portfolio. Here are some of their popular products:

Of all DeWalt Drill Screwdrivers, I believe the DCF620D2K stands out. With speeds of 4,400 RPM, this screwdriver operates up to 700 screws in a single charge.

Although the DeWalt drill screwdriver is not as powerful as Festool, it is much lighter. This means that users find it easy to move it around and work comfortably in cramped spaces over extended periods.

This model also has a combined magazine that has high repeat accuracy. 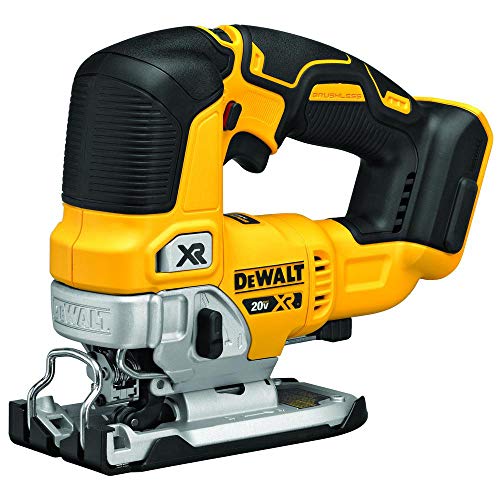 DeWalt DCS334B has outstanding performance compared to other jigsaws. It uses a brushless motor, uses 20 V Max XR batteries, has longer runtime, comes in a compact size, and has 4-position orbital action that controls the speeds and quality of cut.

In addition, the jigsaw also has a variable speed dial, keyless blade changes, and an integrated dust blower for maximum efficiency.

DeWalt has incorporated power and portability in the DWS715 miter saw. It features a 15-amp motor that has rotation speeds of 4,000 per minute.

The 12″ miter saw has a cam miter lock and a stainless-steel miter detent plate that facilitate repeatable accuracy during cuts.

Additionally, this model features a cutline blade positioning system and an improved back fence design for job versatility.

Compared to the Festool miter saw, DWS715 has the best vertical cutting capacity. 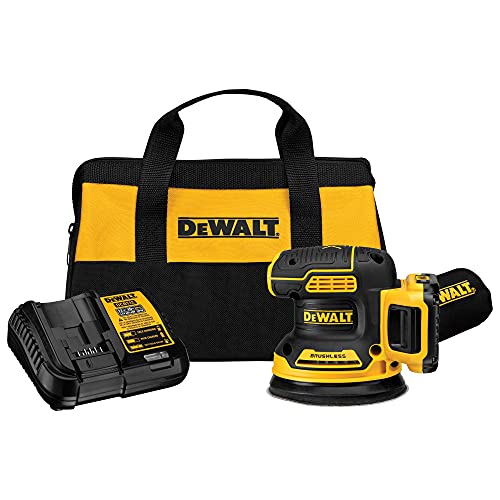 I believe the DeWalt DCW210D1 is the best cordless orbital sander in its class. It uses a 20 V battery that generates speeds of 8,000 – 12,000 OPM. With these speeds, the sander can match the application at hand.

Why You Should Buy DeWalt Products

Here are reasons why you should get DeWalt Tools if you are uncertain about the brand:

Did you know that DeWalt’s slogan is ‘Guaranteed Tough?’ The company’s goal is to design and produce professional workhorse solutions. It aims at delivering high-performance tools even in the most challenging work conditions.

Unlike Festool, DeWalt has a tool for almost every application. Their product line has numerous power tools and accessories.

The company aims at producing products that are suitable for both beginners and professional tradespeople.

DeWalt makes lightweight and portable power tools compared to Festool. Their product designs are lightweight, easy to handle, and carry to worksites.

There is no doubt that Festool and DeWalt produce high-quality and durable products. Both are about a decade old, and they have the experience and expertise needed in the tool-making industry.

Since I have personally used tools from Festool and DeWalt, I can attest to their superior quality.

However, I believe Festool is the best brand in terms of superior quality and durability. However, if you need a budget-friendly brand or a set of tools for your workshop, I recommend DeWalt tools.

What to Consider When Choosing Between Festool and DeWalt Products

Here are other factors to keep in mind when weighing your options.

Why buy a tool if it does not match the job you need it to do? Therefore, when purchasing from either brand, ensure the product has the power and technologies you need.

Besides, if you are looking to buy several tools for your workshop, opt for an inexpensive brand with various options without sacrificing performance. In this case, DeWalt delivers this.

Power tools may have defects from the manufacturer. For this reason, you should consider the brand’s warranty before purchase.

DeWalt offers limited- and lifetime warranties on select tools. They have 3-year warranties as well as 7-year limited warranty.

On the other hand, Festool offers coverage for the tool for the first 3-years, which also includes wear and tear. The company then provides a 10-year spare part availability.

Festool offers their consumers a new tool at zero charges if the parts are unavailable in the ten years.

Both DeWalt and Festool have a 30-day money-back guarantee in case you are dissatisfied with the product.

You should also consider the design of a power tool before purchase. Look for models that have minimal vibrations, are easy to hold and control.

Festool has excellent designs, but they are heavy and tiring. On the other hand, DeWalt tools are lightweight.

As much as you’d love to shop, it all boils down to how much you are willing to spend. Festool has higher quality tools, but they come at a higher price, too.

If someone asked you to choose between Festool and DeWalt, what would be your answer after reading this guide?

I believe that each professional power tool brand has its strengths. When it comes to a vast selection of power tools, DeWalt takes the win. And in terms of super high quality, Festool takes the lead.

Remember, do not make haste when choosing between these two brands. Take time to evaluate the tool you need, then make an informed purchase.

Why is Festool So Expensive?

Festool manufacturing companies are only available in countries that have high-quality products and craftsmanship. Before 2017, their tools were made in Europe. Now, Festool has manufacturing locations in the USA, Germany, and the Czech Republic.

Are DeWalt Tools Made in China?

Yes, some DeWalt tools are made in China. They also manufacture in these countries: Mexico, Brazil, Italy, Czech Republic, United Kingdom, and the United States.

PrevPreviousHammer Drill vs Impact Driver | What Tool Is Better And When
NextMakita vs Ryobi: With What Tools To Go?Next

How To Weld Bandsaw Blades (Requirements)