Prices for scroll saws vary widely. Cheaper models may cost only about $100, while premium models can easily top $1,000. In this article, we’ll cover the best budget scroll saws and what they’re good for.

In a hurry? Here is my shortlist of the best budget scroll saws for 2021! If a model catches your eye, we encourage you to look at our in-depth review below. 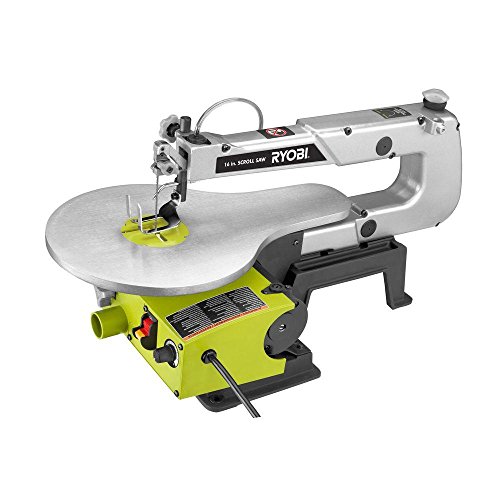 The Corded Scroll Saw #SC165VS is a great scroll saw at a fantastic price. The throat on this scroll saw is quite generous at 16 inches, which allows you to work with larger pieces of wood. This often comes in handy while using scroll saws.

Electronic variable speed allows for 550 to 1600 Strokes Per Minute (SPM). And the induction motor is designed with longevity in mind. Quite likely, this saw will last for years to come. Ryobi backs their saw up with a 3-year limited warranty.

As you look at the details of this saw, the picture only improves. Ryobi is a well-regarded Japanese toolmaker, and their attention to detail really shines through. This saw uses a cast iron plate to reduce vibrations, which can mess up cuts.

The Ryobi 16 in. Scroll Saw #SC165V is a great budget saw, especially for beginners. The setup is by and large easy and intuitive to use. The saw offers enough cutting to handle many different projects, and value-added components, like the dust blower, come in handy, especially for those new to scroll saws.

If you’re new to using scroll saws, you may struggle to deal with vibrations. While the Ryobi 16 in. Scroll Saw #SC165V does suffer from unwanted vibrations; the heavy cast iron plate dampens them. In addition, the blade tension knob and tool-free blade camp add more convenience.

On the whole, this saw is easy to use and maintain. Coupled with an affordable price tag, this makes the saw a great choice for people new to scroll saws. 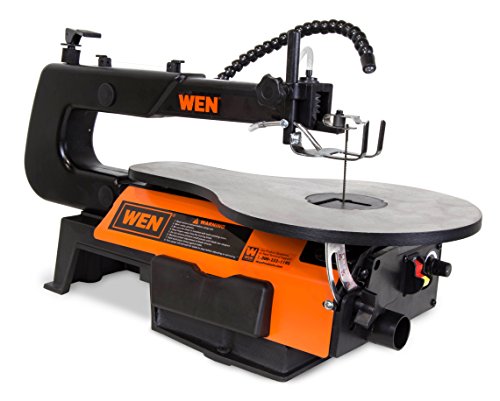 WEN is establishing itself as a leading budget brand. While the tools offered by WEN are generally quite affordable, they typically feature good build quality and enough power to tackle a lot of different jobs. The WEN 3921 16-inch Two-Direction Variable Speed Scroll Saw lives up to this billing.

The WEN 3921 16-inch offers variable speeds between 550 to 1600 strokes per minute. This saw also accepts pinned or pinless blades so that you can go with your own preference. The beveling table is both spacious and can tilt up to 45 degrees (to the left).

If you spend a lot of time around the workshop, you may have found yourself struggling for light from time to time. Even if you’ve got great overhead lights, you’ll often find that you don’t have enough light right where you need it.

Fortunately, the WEN 3921 16-inch comes equipped with a handy attached LED light. This light is highly adjustable, making it easy to light up hard to see parts of the wood and the designs you’re bringing to life.

Features found on the WEN 3921 16-inch scroll saw include:

The LED light proves to be especially handy.

It’s a wonder that more tools don’t come equipped with LED lights. Even in a well-lit workshop, you may find yourself lacking light for certain projects and cuts. Sometimes, you need to get up close and personal, which can block out overhead lights and the like.

If you go with another saw, consider picking up a snake light, which can come in quite handy around the shop. Also, extra light can come in handy while cutting intricate designs with a scroll saw.

It’s nice to see value-added features on a very affordable budget tool. Besides the light, this WEN unit offers a solid cutting experience and enough flexibility to complete most projects. 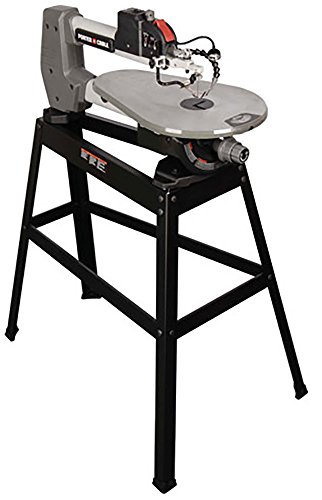 If counter space is at a premium in your workshop, this PORTER-CABLE 18-inch variable speed scroll saw with a stand could come in quite handy. You don’t have to use up counter or table space setting this saw up. Further, working with wood, especially larger pieces, can be easier when there’s not a table to get in the way.

The beveled table tilts up to 45 degrees. This scroll saw offers variable speeds between 500 to 1500 strokes per minute. There’s an attached LED light, making it easier to make intricate cuts. The sawdust blower comes in handy as well.

On the whole, this is a well-rounded saw, although it falls a bit behind the competition in regards to strokes per minute. It’s also a bit more expensive than many of the scroll saws on our list. Still, the stand helps justify the additional cost.

Features found on the PORTER-CABLE 18 inch variable speed scroll saw with a stand include:

The sturdy stand on this PORTER-CABLE saw makes this an easy tool to keep around the shop.

If you’ve spent some time in a workshop, you may have noticed that there’s rarely enough space on your counters and work tables. Unfortunately, scroll saws take up a good amount of space, and most of them sit on top of a table or counter. But not this PORTER-CABLE scroll saw; it comes with its own stand.

If you’ve got some extra floor space, you can set up this scroll saw while keeping your counter and table space clear. This scroll saw also includes an attached LED light, which comes in quite handy. Further, the bevel scale on the table is easy to read and work with.

Add it all up, and this is an easy scroll saw to work with and worthy of consideration as the best budget scroll saw. 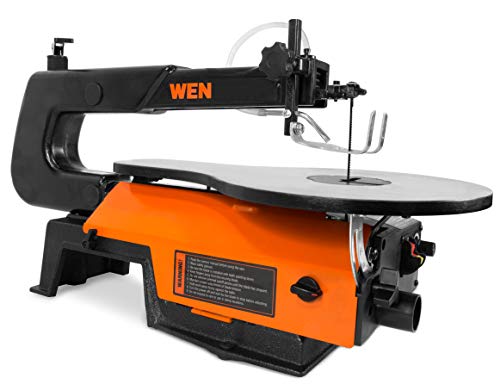 The WEN 3922 is very similar to the WEN 3921 saw we mentioned earlier on our list. This saw features a similar motor and offers 550 to 1600 strokes per minute. Likewise, the bevel table tilts up to 45 degrees, and you get a sawdust blower and sawdust collection port.

The WEN 3922 also typically retails for a bit less than the WEN 3921 scroll saw. So what gives? In this case, the 3922 lacks a few value-added features, such as the LED snake light and a convenient storage area.

I recommend spending a bit extra for these value-added features, but if you’re on a very tight budget, the WEN 3922 16-inch Variable Speed Scroll Saw is, dollar-for-dollar one of the best scroll saws you can buy.

You’ll miss out on a few value-added features buying the WEN 3922 rather than the WEN 3921 scroll saw. The LED light found on the later unit is convenient, for example. Still, if you’re on a tight budget, the WEN 3922 is hard to beat. And if you have an LED snake light laying around the shop, you might not even miss the attached light.

If you’re unsure whether using a scroll saw is useful for you and your project, this saw is a great choice to test the waters. It offers enough power to complete many projects and to make intricate cuts. Build quality is good too, especially for the price. 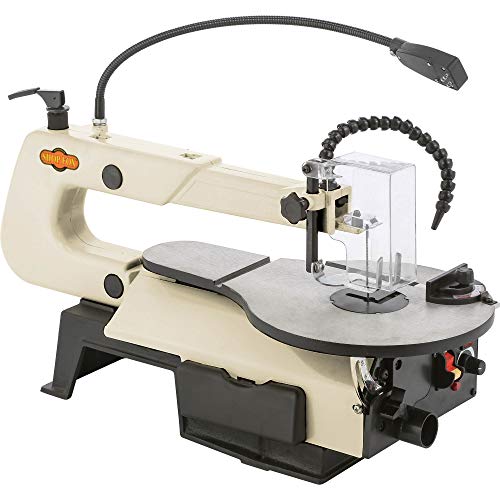 The Shop Fox W1872 16 Inch VS Scroll Saw is an attractive, sturdy saw that offers some nice value-added features, such as an attached LED light. With a max cutting thickness of 2 ¼ inches and a 16-inch max cutting width, you can work with a lot of materials with this saw.

You also get a rotary tool attachment, foot pedal, and variable speeds ranging between 550 to 1600 strokes per minute. The rotary attachment allows you to use rotary bits without having to buy yet another power tool. When it comes to the workshop, flexibility and reducing redundancy are always appreciated.

Let’s take a quick look at some of the features offered on the Shop Fox W1872 16 inch VS Scroll Saw:

You can buy stand-alone foot pedals to use with a variety of woodworking saws and tools. Still, buying a pedal means spending more money. If you don’t have a separate foot pedal at home, you should closely consider the Shop Fox W1872 16 Inch VS Scroll Saw. Once you start using a foot pedal, it’s hard to go back.

The Shop Fox W1872 16 inch VS Scroll Saw also offers a handsome design, LED light, and other features. The rotary attachment is also an excellent add-on feature not found on all scroll saws.

While a bit more expensive than some units on our list, this scroll saw is still a great deal and will serve many people well. 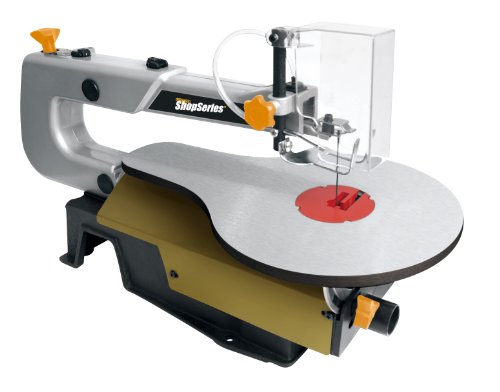 The ShopSeries RK7315 16-inch Scroll Saw with Variable Speed Control is a great saw for an excellent price. The dual cast aluminum table tilts up to 45 degrees. The wide throat allows for 16 inches in cutting space. You also get a max cutting depth of 2 ½ inches.

The included tungsten carbide blades are sharp and likely to last awhile.

Sometimes, when you buy a saw, you open the box and realize it didn’t come with any blades. Often, this means your projects get put on hold while you find the right compatible blades. Other times, you find blades in the box, but they’re already dull.

The included tungsten carbide blades included with the ShopSeries RK7315 16 inch scroll saw should offer good cutting power and are likely to last quite a while too.

If you’re on a very tight budget and can’t spring for the Ryobi 16 in. Corded Scroll Saw #SC165VS, the WEN 3922 16-inch Variable Speed Scroll Saw is a great scroll saw at a fantastic price. Wen is building a reputation for providing quality products at accessible prices, and this scroll saw is no different.

At the other end, the PORTER-CABLE saw with a stand costs a bit more than many of the saws on our list. However, it’s a solid saw and a great choice if counter and tabletop space are limited. The Shop Fox W1872 16 Inch VS Scroll Saw is also a great choice that falls towards the more expensive end of our list. The foot pedal, in particular, is a handy touch.

How A Scroll Saw Works & How To Use One

How A Scroll Saw Works & How To Use One

Scroll Saws Vs Jigsaws (What Are The Key Differences?)