I know not everyone is lucky enough to have a large workshop, so making full use of the available space becomes even more important. But I get it, you venture online to look at your options, and you feel inundated by it all.

You see, band saws, in particular, can make such a difference to your projects. So it’s no surprise to find many of these band saws available on the market.

But I don’t want you to struggle with your decision. That is why I have taken my years of experience working with power tools and sought to discover the best benchtop band saws money can buy.

How I Made My Decision

I didn’t simply select five different saws and thought they would work for everyone. Instead, I applied different criteria to help me with my decision.

I clearly had price in mind because I wanted to cover all bases regarding the cost. However, there’s much more to a band saw than the price.

That means I also looked at reliability, ease of use, how easy it is to set it up, and the results you can achieve. By the end, I could then settle on what I see as my top five benchtop band saws.

If you prefer a horizontal band saw, I suggest looking at this model by WEN. Not only is this model compact in size, but it also packs a serious punch when it comes to cutting power.

It may only have a 4.5 amp motor delivering up to 260 FPM, but I promise you will be amazed at what it can achieve. Also, I do love the fact that this model is so compact. So, if space is an issue, then this model could be the perfect solution.

I also noticed that this model has an impressive cutting angle ranging from 0 to 60 degrees. That’s more than you get with other models on the market, so it does increase the versatility of this model.

The guides are ball-bearing guides, which means they come with an ultra-smooth operation. Durability in this respect will also not be a problem.

While this model may be small, I feel it’s still more than capable of helping you with a number of projects. Also, it does hold materials tightly, so there are no safety worries in that respect. 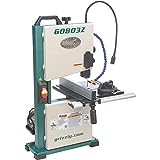 While cutting wood with a band saw is easygoing, things change when cutting metal. So, I suggest the Grizzly Industrial G0803Z if cutting metal regularly is your thing.

There is so much for me to love about this saw. First, it does deliver enough power via a ⅓ HP motor, but that’s not the key part of this machine. Instead, I love the absolute precision that comes with this machine, along with the easy adjustment.

Here, you get one heck of a sturdy rip fence, and with a 9-inch cutting depth, it is also quite impressive for a benchtop model. It also has an aluminum table measuring 11 ¾” by 11 ¾”, so you get ample space for most of your metal cutting exploits.

Finally, Grizzly Industrial has also made sure to include a number of safety features, which I’m always a fan of, consisting of a paddle switch and quick-release blade tension.

Overall, this machine does do more than just cut metal. It’s more of a heavy-duty benchtop band saw, and that’s why I feel it may not be the best option for people starting out. It can cope with many more projects than you expect, so versatility is also not a problem with this machine.

This is not the only model by WEN that appears on my list, and it’s for a good reason. They just make some of the best benchtop band saws on the market.

I love this model, and it’s easy to see why when you dive into what it offers you. Also, I feel it strikes the perfect balance between price and functionality. You get the best of both worlds, and the model is ideal for every hobbyist.

First, it has an impressive cutting depth of 6 inches. Also, the throat size is larger than you see with other brands, so you know this model can handle slightly larger materials.

With ½ HP, you do have enough power behind you for most of those small projects. Also, the ability to change between two speeds makes life easier. It then makes quick work of pretty much anything you throw at it.

But even though it has a lot of power, people report that this band saw is exceptionally quiet when in use. That applies no matter the speed, and then you have a dust port system, so there’s little in the way of mess.

For blades, this machine uses a 72-inch long blade with widths varying from ⅛ to ½-inch. That should provide enough versatility when carrying out either curved or straight cuts.

Overall, I feel this benchtop band saw is one of the easiest to use, and the precision you can achieve makes it one of the best. 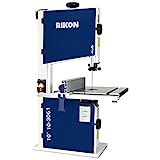 If I were to rate the best benchtop band saw on the market right now, I would probably opt for the Rikon 10-3061, but the 10” model. It has everything you need for a serious woodworker and does its job without too many problems.

I do like the fact you have two speed settings. Very few benchtop band saws come with more than one setting, so that’s a real bonus.

The table does also tilt, and it will do so up to 45 degrees making your life exceptionally easy with those bevel cuts. Also, Rikon has attempted to make life so much easier thanks to including a tool-less blade guide and a lever to quickly release blade tension.

Add in a rip fence, dust ports, and even a 5-year warranty, and this is an impressive band saw.

But overall, I hate a band saw that takes time to set it up. Well, that’s not the case here. Instead, I feel any individual will have no problem setting it up, even if they’re entirely new to band saws. 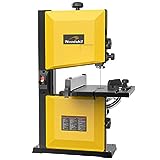 If you are worried about potentially using a band saw for the first time, then I suggest the WEN 3959 9in model. It keeps things nice and basic while still offering a high degree of functionality,

It doesn’t come with an option to vary the speed, but that’s common in these band saws. However, I do love the fact that it does tilt up to 45 degrees, so you should have no problem cutting those angles.

The model does provide you with a rip fence, miter gauge, and it comes with a dust port. I love this as not every model on the market delivers those items to you, yet it makes a difference with the functionality.

The band saw does come with a 59 ½-inch long blade, and the width of the blade can vary from ⅛ to ⅜ of an inch. Adjusting the blade is also exceptionally easy, with little required to set up the machine.

How to Choose the Right Benchtop Band Saw

So you have probably checked out the different models listed above and now feel you want to press ahead and purchase your own band saw. I completely understand your sense of excitement as you think about how you could use this tool with your projects.

However, I want you to just take a few minutes to review my simple guide. By the end, I feel you will have a better idea of how to choose your brand-new band saw.

The first thing I need to mention is the power aspect. How much power you need does depend on the projects you plan on completing.

Keep an eye out for the horsepower. However, some smaller models will talk about power in amps, which could lead to confusion.

But staying with the horsepower aspect, you will generally find it varying from ¼ to ½ horsepower. I would suggest pushing for the ½ horsepower as a minimum. It does mean you have more options when it comes to the projects you can work on. It’s best to have too much rather than too little.

Speed is less of an issue regarding a benchtop band saw. As these tools are designed for smaller projects, you don’t need as much speed, hence the reduced power.

Often, they will work at only one single speed. Anything else is merely a bonus, but it’s not always a clincher when making your decision.

It makes sense to understand the band saw’s cutting capacity before you make that purchase. After all, you need to know those limitations, or your band saw could come up short with your projects.

Here, you need to look at two different numbers with both throat and cutting depth, both indicating the overall capacity.

The throat measurement refers to the distance between the blade of the saw and the vertical frame. This measurement is essential. It lets you know the width of materials you can work with on your band saw.

As you look through the listings, check for 16” or 18” measurements. When they refer to it in that way, they generally mean the throat measurement.

Generally speaking, the throat will often sit between 9” and 14” when you have a benchtop band saw.

The other measurement is the cutting depth, which deals with the measurement between the actual table and the upper band guides. The measurement here will then represent the maximum thickness this particular saw can handle.

For a benchtop version, you will generally look at a depth of anywhere from 6 to 12 inches. Of course, I suggest you think about how you will use the saw in the first place to help you work out which depth is best.

I also believe that every benchtop band saw should come with an angle tilt and go up to a 45-degree angle. That helps you out when it comes to making those angle cuts. If the band saw you are thinking about purchasing does not offer this, walk on by. It’s not worth the money.

Just because you are looking at a benchtop version does not mean you forego dust collection. It makes life so much easier when you don’t have dust covering anything, and most band saws come with a dust collection port as standard.

But do still spend time double-checking that this is the case.

I would also strongly suggest you look at models with a miter gauge and a rip fence included. Both these items will make a huge difference when you plan on ripping, cross-cutting, or even resawing.

A benchtop band saw can quickly transform how you deal with so many different projects. It takes up less space while still providing you with a real sense of functionality is really amazing.

I love that even individuals with limited space don’t need to miss out on having a band saw in their workshop. The models listed above come in different sizes, so just be aware of this before buying.

At the end of the day, I know you will quickly fall in love with your benchtop band saw. I know I did, and I still feel it was one of my best investments. You will undoubtedly feel the same.

Hi, I’m Barry. I’ve loved woodworking and bringing things back to life for more years than I care to remember. I hope my passion for tools comes across loud and clear in everything you read here on The Tool Square.